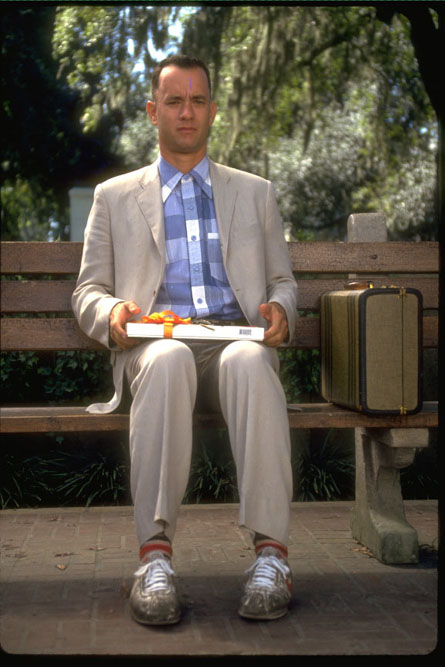 The anonymous and always-enigmatic Editor of Blawg Review (not pictured above) offers a "sampler" of each of the past year's editions of the carnival of legal blogging in this week's Blawg Review #244. For obvious reasons I was reminded of those Whitman's Sampler chocolates I used to see around Christmas and Valentine's day; those boxes of chocolates are also an apt metaphor for Blawg Review itself. To paraphrase our learned friend, Blawg Review is "like a box of chocolates. You never know what you're gonna get." Glancing through Ed.'s capsule summaries of the year's more than four dozen posts, one can't help but be impressed by the creativity and variety offered each week by Blawg Review's hosts.

As has become his custom at the end of each year, Ed. has issued a call for Blawg Review of the Year nominations. It would be nearly impossible for most of use to nominate just a single review as "best" and, thankfully, Ed. doesn't ask us to do this. Instead, we're invited to nominate as many of 2009's Blawg Reviews as we see fit. Though nominating just one post would short a number of worthy contenders, I think that nominating too many very good posts would fail to give the greater ones their due; as in years past, I've somewhat arbitrarily limited my nominations to the five I thought were the best of the best this year:
Though the rules for Blawg Review of the Year have changed a bit from year to year, thus far the winner has not. Let's remedy that injustice this year. Take a second look at a few of the more memorable Blawg Reviews in Ed.'s sampler and get your nominations posted!
Posted by Unknown at 17:00
Email ThisBlogThis!Share to TwitterShare to FacebookShare to Pinterest