In the meantime, will someone please buy Mr. Heller a revolver?

Dick Heller, a resident of the District of Columbia, was denied a permit to possess a handgun for self-defense. He sued the District, seeking to invalidate, or at least to limit, the District's categorical ban on personal ownership of handguns. He was ultimately successful; the United States Supreme Court recently found in his favor. In his majority decision in District of Columbia v. Heller, Justice Scalia wrote:

In sum, we hold that the District’s ban on handgun possession in the home violates the Second Amendment, as does its prohibition against rendering any lawful firearm in the home operable for the purpose of immediate self-defense. Assuming that Heller is not disqualified from the exercise of Second Amendment rights, the District must permit him to register his handgun and must issue him a license to carry it in the home.

With a Supreme Court victory under his belt and a run-of-the-mill seven-shot semiautomatic pistol in his possession, Heller's permit should be forthcoming, one might think. Well, in the District of Columbia, home of the Supreme Court, one would think wrong. Via HotAir.com, DC-Area channel WUSA describes this morning's scene:

Dick Heller is the man who brought the lawsuit against the District's 32-year-old ban on handguns. He was among the first in line Thursday morning to apply for a handgun permit.

But when he tried to register his semi-automatic weapon, he says he was rejected. He says his gun has seven bullet clip. Heller says the City Council legislation allows weapons with fewer than eleven bullets in the clip. A spokesman for the DC Police says the gun was a bottom-loading weapon, and according to their interpretation, all bottom-loading guns are outlawed because they are grouped with machine guns.

While we wait for someone to explain to the District's officials a bit about pesky matters like the rule of law, the Second Amendment to the Constitution, and the authority of this nation's highest court, perhaps we might be able to find Mr. Heller some sort of interim solution. A nice revolver might be sufficiently unlike a machine gun that the District will graciously permit him to possess it. If nothing else, it might force them to concoct a more plausible excuse for not issuing Heller a permit.

Personally, I think he should get a nice pistol like this one: 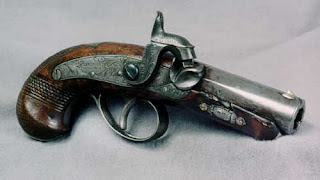 This pistol's muzzle-loaded, so there are no pesky "bottom-loading" issues to concern the DC Police's gun nannies. It has only a single shot capacity, so it's below the District's ridiculous magazine capacity threshold. Heller's own pistol was as well, of course, but only by four rounds; this weapon's fully ten rounds under. Now the DC policeman who's processing applications when Heller returns can use all of his fingers to do the math.

Moreover, it's not like anyone in the District has ever been killed with such a limited weapon. 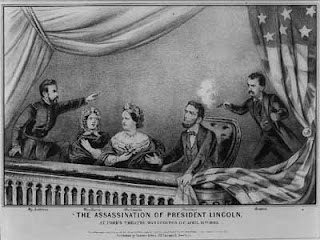 Posted by Unknown at 12:45
Email ThisBlogThis!Share to TwitterShare to FacebookShare to Pinterest